Back to all posts

Episode XI: What's That Smell? 6am! 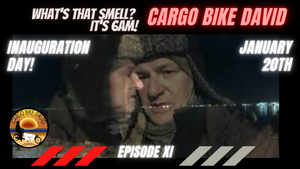 It’s January 20th and I set up at the North Western Leg of the San Leandro Marina.  And while this segment is ‘What’s That Smell? 6am!’, I’d really love to have some traffic on my YouTube channel, Cargo Bike David.  I also do some shorts on Instagram at cargobikedavid and if you’re able to stomach the format, check out my facebook pages.
Here and there, I end up with a lot of goofiness and hopefully some useful insight and information.  And sometimes mix in some deep thought and provocative themes!
Lastly for the blatant self promotion, you can find musical cuts from my past as well as my State of the Art, Mind Music compositions on this Pono Media Company website. Monthly Notification

It’s another beautiful morning as the haze just started to drop down and onto the bay.  That brought with it some cooler weather as the combination of breeze with the moisture slammed the ‘wind-chill factor’! Other than that, the skies were clear and you could see the lights of the Oakland Airport and the Bay Bridge, as well as ‘The City’!
As far as ‘What’s That Smell?’ goes, it smells a bit like rain this morning.  Although, there isn’t any in the forecast!
So, I’m thinking that it’s going to be a very big day in American history today as we’re about to inaugurate a new president.  It’s definitely on the heels of one of the biggest bummers that I’ve ever witnessed, which was the trashing of our American Capital Building.  Yup, last week on December 37th, a lot of people did some goofy stuff in Washington and I’m just kind of wondering what they were thinking?  And there were probably a lot of people that wanted to go there and be a part of it, but they probably had jobs, or family to look after. Or maybe, they just thought better of possibly causing a ruckus!

So, yeah!  What were they thinking?

Maybe they could replace democracy with what?  More democracy?  And a little bit more democracy?  I don’t know, but maybe “Their” democracy.  Which in reality would be an authoritarian type of thing.  STOP!

You know, we are very fortunate in the United States to have a democratic republic.  Which generally means that legislation is decided by a majority vote.  Our representatives are empowered to declare the choice of their constituents.
And sadly, a lot of times they are influenced by lobbyists, that are not exactly in line with their constituents, but that’s another story another day!

So a democratic republic is how it’s supposed to work, and honestly, and for the most part, it does work! It works better than any other Governing System in the world today.  But let’s tweak it a bit. It really should be as simple as voting, so that if you don't like what's going, get out and vote!
And don’t whine and complain if your choice is not the victorious decision!
It's just the way it works and realistically, our political system is being emulated around the world!  So to call our election results a fraud, well a lot of people are being told and believing that it's fake this, and fake that.  There had been a lot of name calling and labeling.  It's really very unfortunate that our so-called leaders can be so petty, so misleading, verbally abusive and ultimately, sore losers!
I liken this whole shenanigans to me getting called for a penalty in my ice hockey game.  Sure I often try to convince the referee that there was no infraction.  But he/she calls a penalty on me and I go to the penalty box.
The end of the story is that I respect the officiating, I respect the rules. I sit down in the penalty box and I take my two minutes. Sports are a microcosm of life you win some... you lose some!

So my last train of thought is this;  Who did not see this coming?  Five years of calculated rhetoric that was designed to control your mind!  There’s an old adage that says if you tell a white lie over and over and over again, and you say it loud enough and long enough, that people eventually start to believe that it’s true.
Me…. I always  promote looking at both sides of the story, like an equation.  Just look in the mirror!  So, I’ve been sitting on the fence a wee bit, but honestly, we all have to be tired of this crap.  And when you really look at it, like deep down look at our divided selves, it's not really caused by politically based affiliations.  It all comes down to wealth, power and greed!
And that's a sad thing because we are the ones that allow it to happen. Jeff Bezos couldn't be a billionaire if we didn't spend our money on his products and services. Same with the owners of facebook and all these other corporate Millionaire type people.

Change the rules it's almost that simple.

Except for the fact that the people with the money already have the pockets of our representatives.   Like I’ve mentioned before, if my fifty dollars donated to my representative would get me a phone call and my influence could get me a tax break favor, that would be great! But the fact is that somebody else comes up with fifty thousand dollars to that same representative and wants a different tax break for their corporation, he’s more likely to get his way.

So, change the rules!  Greed is the underlying problem of the world.  Creating lopsided economies that dysfunction instead of function.

We have to figure out a way to balance the country’s wealth, because it's all about the interconnectedness of all things.
If we have extreme wealth on this side, you know we're going to have extreme poverty on this other side.  We need to fix that somehow!
One wealthy billionaire type person said that she didn't want to be remembered for her philanthropy.
She wished that she could be living in a world where we did not need philanthropy.

I think that makes sense.